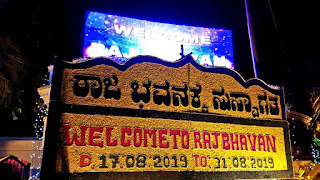 My cousin and I accepted the Governor's invite for an open house and toured the Karnataka Raj Bhavan in Bengaluru today.

As we enjoyed the band playing at the glass house, we were treated to some good tea and sweetu-khara (biscuits). We walked through the garden, marvelling at bonsai trees, enjoying the light spray from fountains, appreciating the manicured lawns, the sculptures of mythical beings watching over them and the variety of flowers and plants grown in the form of different animals. The whole place was lit up with multi coloured lights that enhanced the beauty of the gardens in the evening light.

As we approached the mansion, we watched the tricolor lowered ceremonially, while all the guards stood still firmly in attention.

Inside the colonial-style building, we entered the formal dining hall where its taxidermy animal heads stared down at us from their high perches on the wall, the many British era paintings below them tried to soften the ambience, the crystalware in the solid wooden cabinets reminded you of the real purpose of the room, while the ancient sculptures transported you to a different era altogether.

Next we visited the governor's office with its two rows of red cushioned chairs with the governor's blue cushioned chair presiding over them. This hall is dotted with beautiful artifacts from several centuries. The seats in the waiting area have enamel designs on wood and plush cushions covered in bright embroideries. The walls are lined with collections of photographs of all governors of Karnataka, presidents and prime ministers of India. One end offered a delightful view of the garden, while the other end lead to the ceremonial hall where leaders are sworn in.

The ceremonial hall is an awe inspiring place too. It's walls are decorated with glorious Tanjore paintings and enormous tapestries which would look even grander with some restoration. Rows of wooden chairs emblazoned with the national emblem were neatly lined up facing the stage which was now covered by a giant screen. A short video showcasing aerial views of the campus and a quick tour of the interiors and arrangements at the Raj Bhavan was followed by a recorded speech by Governor Vajubhai Vala.

We left the hall and walked past a series of rooms meant for official guests, each named after an Indian river. We exited the mansion, walked through a small portion of the garden, past a rudraksha tree planted by Prime Minister Modi, and found ourselves back at the flower clock by the main gate after 1.25 hours. Since we couldn't click photos during the tour, I satisfied my rebellious itch by sneak-clicking a picture then and there. 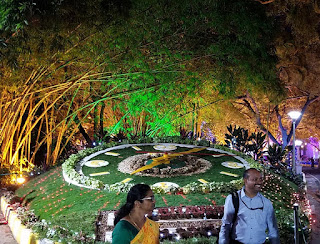 Too bad the Governor didn't meet us. Oh well!