It Happened in India

Kishore who? For the ignorant ones (like me, previously) he's the guy behind Pantaloon, Big Bazaar, Future Bazaar and the Future Group. Impressive portfolio once you look him up. So as not to deprive him of his due credit, Dipayan Baishya is the co-author.

How did I stumble upon this? I got a promotional offer announcement by email from FutureBazaar, since I had bought something online from them a long time ago. It said that the first 100 buyers of the book would get a personally autographed copy. So I decided to look the guy up. And then I found out that he's the guy behind Pantaloon and Big Bazaar.

Ok... I've read books about American entrepreneurs -- The Google Story, Warren Buffett - The Making of an American Capitalist. I really enjoyed reading both these books and they left me inspired and dying to do something myself for the sheer joy of doing it. Now a book about an indigenous Indian entrepreneur!? This is something I gotta see. Plus... I liked the idea of owning a personally autographed autobiography! Plus dirt cheap price - 99 bucks. I had to make this purchase.

I'm done reading over half way through the book. Gotta admit it's not as big in scale as the story of the Google guys or Warren Buffett - my heroes, whom I look upon as demi-gods. But this is something that's happened close to home and something that I can witness first hand too. Exactly why I liked The Google Story and Warren Buffet - I could verify and actually experience the things that were being written about. I hate shopping and detest going out to buy anything. Prefer to be done with it online on the occasions where I have no choice. But now I'm tempted to pay a visit to a local Big Bazaar, only to live the things the author writes about.

One particular aspect of the book that I truly appreciated, is that the story is not a monotonous monologue. It is interspersed with several articles and letters / testimonies of the people with whom Kishore Biyani has worked with. And these pieces aren't made to stand out - seeming like appendages - but actually contribute to the narration of the tale. Immaterial of whether they have been printed with the original words of their respective authors, or edited to suit the book, these letters / testimonies / clippings of newspaper articles blend seamlessly and contribute to the flow of the story. KB picks up at exactly the point where the quotation leaves you. This concept has appealed to me very much.

The Google Story and Buffett's biography, too, did quote things that people close to the subject(s) said, but they were usually limited to a one-liner or two-liners and didn't represent that person's complete perspective. But the format in this book paints a more complete picture and represents the views of KB's associates in a better manner. Of course all the testimonials are from supporters, or former non-believers who've now turned believers, and has none from existing critics. However, KB frequently reminds the reader of the obstacles he faced and the mistakes he committed and learnt from. Therefore it's not all rosy, but it's not too negative either.

Overall, so far, it's made for good reading.

While browsing in our club library, I picked up a book because it bore the name of Mahesh Bhatt - the famed film director. I found it surprizing that the man had sufficient skills to write a book. Little did I know then that he regularly publishes in many a newspaper. My presumptuous self was suitably put back in place.

Another reason I found for self-amusement was the sudden and increasing appearance of the name U.G. in the most (un)likely places.

1) There's an old book about conversations with U.G. which I have placed upright in my bureau - I'm not sure whether it belongs to my dad or his grandad or anyone else, but for all practical purposes I call it my dad's . I once picked it up and made an attempt to read it. I didn't know who U.G. was. I asked mom. She said he's one of India's greatest contemporary thinkers. Even then I didn't find enough motivation to carry on. I replaced it in the place I'd created for it.

2) Months later, I was randomly downloading videos and somehow landed up at a web-site where the author/owner/interviewer has interviewed many a thinker/philosopher of our time. There I ended up reading a transcript of an interview with U.G. At the end of it, when I turned off my computer and turned to my bed, my impression of U.G. was that he was a pompous man begging for attention by indulging in gimmicks such as denying all conventional thoughts and theories.

3) On 18-Mar-2007 I picked up a book only because I recognized the author Mahesh Bhatt and it turned out to be a biography of U.G. One of my first thoughts was "Why would someone as distinguished as Mahesh Bhatt bother writing a biography of someone like U.G.? I've gotta find this one out."

So there I was finally reading about U.G. To say that I approached U.G. with an open mind would be wholly untrue. The intention with which I started out was to discover and evaluate for myself whether this man was worth his salt. However I can say that I started out with clean slate - free from all prior (factual) knowledge, except my own thoughts. 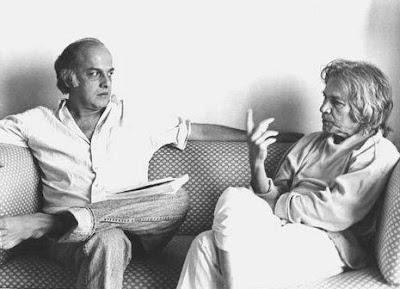 Mahesh Bhatt with his anti-guru

Through Mahesh Bhatt's writings, I found U.G. to be an intriguing personality. Reading Mahesh Bhatt quoting U.G., I realized that I had slowly, unknowingly fallen into the trap of holding increasingly strengthening views/beliefs which were progressively tending towards inflexibility. Where did my questioning disappear? Why has the current gradually reduced in its intensity? I'm becoming an adult - one with preconceived notions/stands. Stop! Revert to a previous checkpoint - one where you still had immense capacity to question anything and everything. Thanks U.G.! Thanks Mahesh!

Mahesh Bhatt dedicates a whole chapter to U.G.'s "Death experience". I read it with interest. Here for the first time I see documented evidence that people feel electrically charged. You can see that I blogged about a similar recurring experience in my own life here. The observant reader will not fail to note the date of the post. Another amazing coincidence - one of the many that constantly pop their heads at frequent intervals!

You go through a certain experience. You think you're the only one because you've not heard anyone else in your circle mention it. Finally you summon up the will to face and put up with their sniggers and share it with them. They don't disappoint you with their reactions! Towards the end of the 'discussion' you lose your ability to take more of it and laugh saying "Well... What can I say! I'm a freak of nature!", thereby effectively ending it. Then you unexpectedly read a piece where someone has documented a similar experience and you say "Okay... it's something at least. Guess I'm not the only freak." This kinda frees you of the implicit burden that comes with being the sole bearer of a certain title - good or bad, it's your reputation at stake out there... and at all times!

Well... when the above happens and the other person is someone of U.G.'s stature (a great Indian thinker), one should be allowed a little leeway and forgiven if one takes an ever-so-minuscule moment to be the one who sniggers. For it definitely can't last longer than that. The description of the phenomenon/incident is immediately followed by a quote from U.G. where he says he doesn't want to elaborate on the experience, for he fears others who would like to share the limelight of his 'greatness' would cook up similar experiences and stake claim for 'greatness'.

You just can't escape the feeling of having received an unexpected blow in your stomach. But... Hey! It still doesn't negate the occurrence of the phenomenon in my life! I can prove it. But... Dude, what're you trying to prove? To whom? Why? And then... Yeah, I have no need to prove anything to anyone. It's not of much consequence anyways. So... Relapse into your 'conservation of energy' mode. Hmmm... There! The matter's settled.

I read the whole book with interest. It didn't impress anything permanent upon me. It didn't make me start believing in something new - a belief I didn't hold before. It just reinforced in me the thought that there's nothing wrong in my questioning of things. If I sit down for a more detailed examination of what U.G. said and practiced, I'm certain that I can find many a contradiction in his words and deeds. But I have neither the inclination nor the motivation for that now. Maybe at a later date... For now I'm just happy to be reminded that it's ok to question all things high and sundry.

Today I Stumble-d upon this site which tells me that U.G. died less than a month ago on 22-Mar-2007. I read the news with mixed emotions. Mahesh Bhatt's biography isn't complete. In the narrative on U.G.'s life, Mahesh Bhatt leaves us at the point in U.G.'s life where all the events Mahesh has meticulously documented are in the past. It is also the point where he returns to India, having stayed a month with U.G. for the sole purpose of writing this biography. I knew U.G. had died recently. Maybe within the last year, I had presumed.

I found this obituary which gives a fair account of U.G.'s life, also summarizing everything that Mahesh Bhatt has written in his biography.

To say that I escaped unscathed from all or any influence from U.G.'s thoughts/ideas/'teachings' would be a BIG lie. I do not wholly subscribe to his ideas. I perceive the existence of flaws in his logic, intuitively, even though I cannot substantiate the claim. As I said, I'm not in a mood serious enough to delve into those areas at the moment. If I were a true follower, then I would say there's nothing to be gained by that anyway. Even then I wouldn't be a true follower, for how can one follow a teacher who had NO teaching!

Needless to say, the sense of intrigue that I started out with persists. I shall continue to look up and read about U.G. Another obsession in the making? Maybe. Either way... How does it matter?
Posted by N. Madhavi at Thursday, April 12, 2007 No comments: Links to this post